How will logistics work once tomorrow’s dense and attractive cities are built? This was the starting point when CIVIC and DenCity, two successful community development projects, held a joint final conference on June 19. The collective answer is: more collaboration. 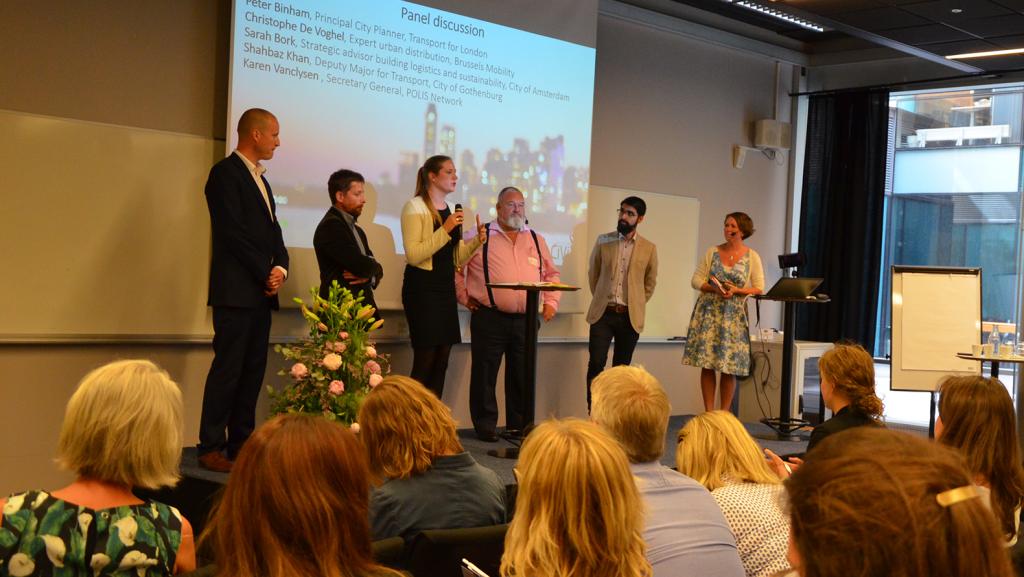 The theme of the conference, which was held at Lindholmen Science Park, was From vision, through construction, to transport solutions for future dense cities.

Take part of the presentations from the conferens here

The projects have been underway for two and two and half years respectively, and complement each other very well.

DenCity has focused on finding ways to introduce freight and transportation issues at an earlier stage of city planning and on transportation solutions for cities built moving forward.

CIVIC works to raise stakeholder awareness about how construction logistics can be improved to reduce the impact on surrounding areas and to optimize energy efficiency during the construction period.

One of the main speakers at the conference was Karen Vancluysen from POLIS, a European network of cities and regions that promotes the development of innovative transportation solutions.

"It is about understanding the needs of both society and people," she said, stressing that clear regulations are the way forward.

- It's the cities that are in the driver's seat!

Lars Marcus, Professor at Chalmers University of Technology in Gothenburg, was also a main speaker. He emphasized the important role played by architecture and that community development is about greater integration of architecture with construction and logistics.

After this, the conference went on to present viewpoints from different perspectives of how the development of the tomorrow’s dense cities should be planned and managed.

Staffan Bolminger, FOG Innovation, who has worked with urban and property development issues for 20 years, spoke of Gothenburg as a test bed, including Frihamnen where a new, central area containing both housing and workplaces is under development.

“There are both challenges and potential synergies,” he said, and maintained that DenCity and CIVIC have considerable influence on development in both Gothenburg and other cities in the world.

Kajsa Hulthén from Chalmers spoke about how logistics in major construction projects can be managed and planned and showed examples from different areas of Europe: Brussels, Vienna, Amsterdam and Stockholm.

“All of these cities have found different logistic solutions,” she said.

In the afternoon, conference participants learnt about the results achieved during the project period. Martin Svanberg from SSPA presented a project where Gothenburg may develop transportation by water for goods and waste — and how the project has provided knowledge, both from an industrial and a research perspective.

“It is better to conduct tests and demonstrations in urban waterways to show everyone what can be achieved — instead of researchers writing theses containing four-syllable words that nobody reads,” he said.

Kent Eric Lång from the state research institute RISE Viktoria spoke about mobility as a service — for example, driving by car from your home without needing to own your own vehicle — when tomorrow’s residential areas are developed with less parking than today.

“We act as though we have infinite resources — and we need to change this,” says Elander.

Anna Fredriksson, Lecturer and Associate Professor from Linköping University, spoke of smart management of construction logistics solutions and how cities, when they expand, “want to maximize solutions — but only as long as they do not need to pay extra.”

“But we achieve positive results when we plan using clear visions,” she said. And the common word is: collaboration.

Collaboration was also the common denominator in the closing panel discussion, with participants from London, Brussels, Amsterdam and Gothenburg. Maria Oscott, Project Manager at CLOSER, the collaboration platform for developing freight transportation that includes DenCity and CIVIC, began by saying:

“Both of these projects demonstrate workable solutions and, while it would possibly be much easier if we were working with a blank sheet of paper, we are starting with existing cities and have to focus on including these solutions in the planning,” she said.

“Collaboration is essential!” he said. No single participant working alone can identify and develop all of the solutions that benefit the city and its inhabitants and businesses.

“Route 55 would never have happened with only one participant — collaboration was essential.”

In addition to collaboration, Sarah Bork, who was also a panelist, mentions the City of Amsterdam and its use of data as a key factor in new solutions.

Part of the conference — conveniently scheduled shortly after lunch — showcased what the project has achieved. Conference participants could try out a construction logistics game, with both opportunities and pitfalls.

Lina Olsson, Project Manager for DenCity, and Lovisa Westblom, Project Manager for the Swedish section of CIVIC, were responsible for the conference and both were satisfied:
“Cities around the world are all facing similar challenges in terms of development and densification — and through this conference we have created beneficial effects by sharing knowledge and experience,” Olsson summarizes.

Westblom adds:
“The inclusion of many participants at an early stage in the planning process highlights the various needs and perspectives. This is important when such complex processes are involved.”

Both DenCity and CIVIC are part of CLOSER at Lindholmen Science Park.

CIVIC is an international collaborative project with participants from Austria, the Netherlands, Belgium and Sweden. A continuation of the project is being prepared, with the participation of Austria, Belgium, Sweden and Norway.

DenCity is a national project, which is also preparing for a continuation.