FR8HUB is a project under Shift2Rail with the purpose of working on technical development of European railways and it can be strategically implemented. FR8HUB will conclude in autumn 2020 and the technologies developed will be further developed in several of Shift2Rail's sub-projects, including FR8RAIL III. 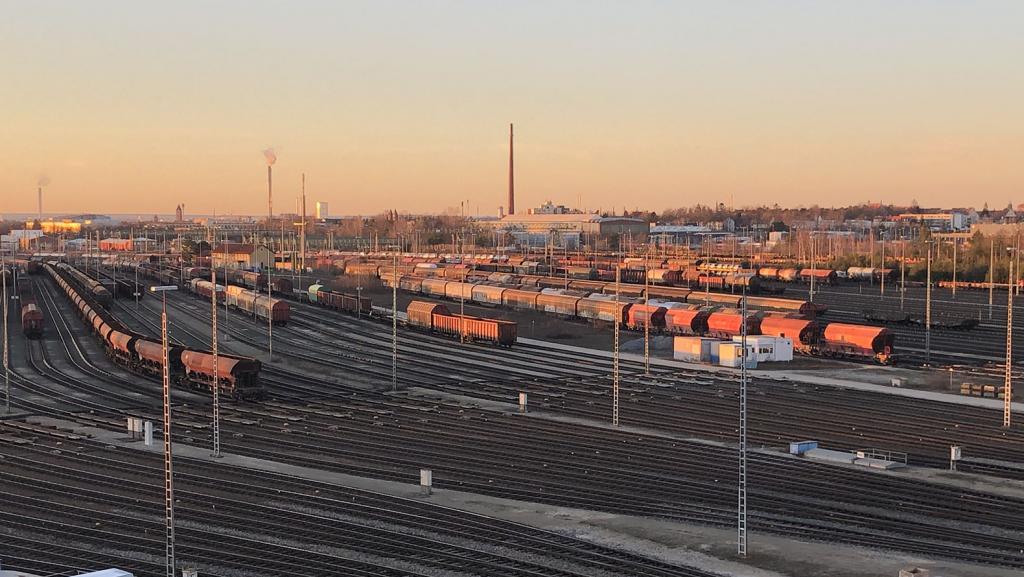 FR8HUB includes 8 work packages. The focus of work package 4 is to develop Intelligent Video Gate (IVG). The gate reads information and takes pictures of the trains going through it to check for defects and wear. This is currently a manual process and the goal of IVG is to initiate automation of terminals.

The technology that enables IVG is a combination of Radio-Frequency Identification (RFID), which is a technology for reading information from distances, HD images and Optical Number Recognition (OCR) that identifies data from images.

- "Without IVG all processes have to be checked and performed by manual work. The HD images taken by the gates give better a better basis for decision-making by making damage and wear visible. This solves practical problems and increases data reliability while at the same time being more time-efficient.  This enables better utilisation of terminal capacity," says Jürgen Karl, Work Package leader  at Deutsche Bahn.

-"Today, information flow in intermodal railway terminals is underdeveloped and much of the exchange is done through manual procedures. The purpose of the gates is to automate the flow of information between stakeholders, including terminal operators, freight forwarders and railway companies. With the gate, all information on the trolleys and load carriers, such as containers and loading platform, is scanned with ID numbers and signs. Once the information has been scanned, it can be used to optimise the terminal's resources by reducing waiting time or optimising interim storage," says Mats Åkerfeldt, strategic planner at Swedish Transport Administration.

Sharing of information must be established among stakeholders

The work on the IVG concept will be developed and implemented in a full-scale test within the framework of FR8RAIL III. The objective based on the results of FR8HUB was initially to install the IVG concept at two terminals, one in Sweden and one in Germany. In Germany, a gate has already been set up on a shunting yard in Nuremberg, and the focus is  now on setting up IVG in Sweden at the Port of Gothenburg.

-"The idea is to investigate differences and synergies between an IVG at an intermodal terminal and in a shunting yard within the framework of FR8RAIL III. Generally speaking, you could say that the one in the rail yard is focused on cart maintenance, while the one at the terminal is focused on detecting carriages, load carriers and dangerous goods. Both entail improved damage management of carriages and load carriers in terminals, because damage is recorded digitally and they make it possible to detect damage automatically. They can improve arrival inspection in the first instance, but departure processes can also be improved via digitalisation and automation of manual processes," says Behzad Kordnejad, Tech. dr., Transport and Logistics at KTH.

-"Detection in the gate takes place via cameras and OCRs and is complemented with RFID readers for carts equipped with RFID tags. FR8RAIL III will further develop algorithms for an efficient image management and the application of OCR technology. Methods and proposals are also developed for the safe and effective distribution of information between the transport chain's stakeholders," says Behzad Kordnejad.

It is important that Swedish railways comply with European standards

IVG is planned for installation on a line between the Port of Gothenburg and the Kville rail yard by 2021 at the latest. The gate is expected to send digital notifications of arriving and departing trains. This provides operators in the harbour advance notification of dangerous goods and carriage and load carrier sequences.

-"It is important to test new technology in Sweden to show that it works for Swedish industry, but also from an international perspective since transport almost always has an international connection," says Mats Åkerfeldt.

By testing new technologies such as IVG in Sweden, it can be ensured that Sweden is at the forefront of railway technologies and that the country is adapted to a common European railway system. This can make transport in and out of Sweden easier, which can make Sweden a strategic trading partner.

Facts
Shift2Rail is a research project within an EU framework programme where the rail industry, public authorities and research have joined forces to take a holistic approach to railway development in Europe. The goal is to sustainably strengthen European industry and develop a common railway system to meet the transport needs of tomorrow. The FR8HUB project includes partners from Italy, Spain, Sweden and Germany.